Despite 250-300cc segments taking centre stage, the quarter-litre space in our country has barely seen any cruiser launches. American motorcycle maker UM Motorcycles, who has partnered with Lohia Auto in India launched its Renegade Commando and Sport S in the market just over a year back though.

These bikes promised the feel of a true-blue cruiser with their styling, which has pretty much been their biggest selling point. The manufacturer has now launched more premium versions of the Commando, the Mojave and the Classic.

The Classic is now UM Motorcycles’ flagship product, and looks premium. Styled as a traditional American cruiser it gets dollops of chrome all round, two-tone paint job on the front mudguard and fuel tank, chromed round mirrors and a windscreen. The Classic is easily the best looking bike from UM yet, and with its paint job, pinstripes and chrome it looks very appealing. It also gets clear lens turn indicators unlike the Mojave. I would have liked an LED stop light too on keeping with the positioning. 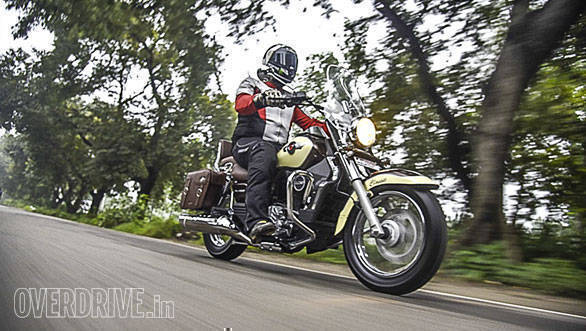 The UM Renegade Commando is styled as a traditional American cruiser

Just like the Mojave, the Classic gets a saddlebag on the right side, finished in faux leather, along with a similarly finished strip along the length of the tank that also holds a tank pouch. Fit-finish levels and paint quality are good, exuding a more premium feel as compared to the standard Commando, as intended. That said, quality of plastics used for the switchgear, finishing on the clutch and brake levers could have been better.

Th Classic is identical to the rest of the UM line-up in terms of the powertrain and cycle parts. It comes powered by the same 280cc, liquid-cooled single cylinder engine that produces 25PS and 23Nm. The engine uses fuel injection and boasts a four valve head. The motor is mated to a six-speed transmission. The engine and gearbox did not feel different from what we have experienced on other UM machines, and I would have liked some more punch and slicker gear changes.

Refinement levels are decent though, with only some vibration creeping in through the footrests. The engine feels comfortable cruising at an indicated 100kmph in sixth, but the lack of a tachometer meant I couldn’t see what revs the engine was spinning at, at the time. Our rather short ride allowed us to experience the bike on traffic free roads in Uttarakhand along with a few stretches of open highways.

Slightly shorter gearing should help improve bottom end grunt, though top end performance feels adequate to let you cover distances at a decent pace. Wind protection from the Classic’s windscreen is good, but only at highway speeds and will restrict airflow in city. The Classic’s more relaxed riding position has you place your feet forward which should be good for riding distances, but the contour of the seat could have been better for the purpose.

One highlight about the Renegade Commando Classic is the lightness and agility. The bike offers a nimble feel and quick directional changes are never a problem. Negotiating through broken roads thus wasn’t an issue with the handlebar offering good leverage despite it being a cruiser-styled laidback unit. Riding in traffic thus shouldn’t be a problem either.