It’s the clash of old vs new, raw power vs charm. So, which motorcycle of these two can double up as a daily commuter and also be able to stretch its legs well while out touring? 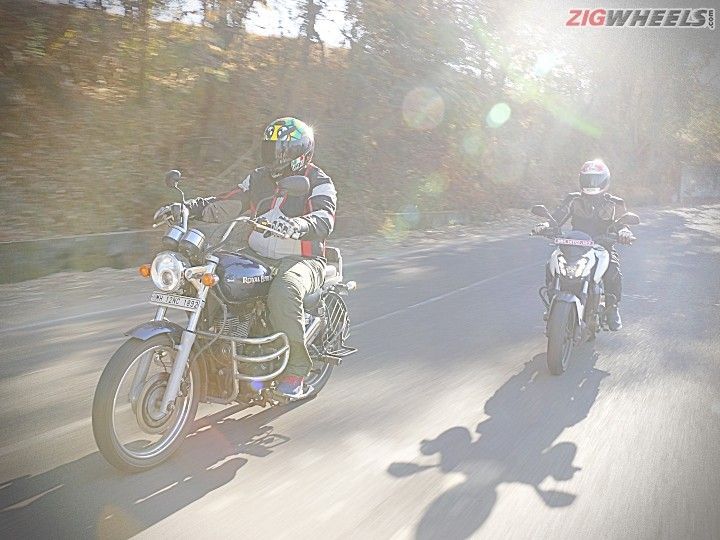 Motorcycling is a channel for many to destress themselves and the number of people exploring the beauty of our country on two-wheels has increased considerably in recent times. And often, riders need one motorcycle that can do it both – the weekday grind, and the wild weekend escapes.  And there is one brand that has become the quintessential choice for such a life – Royal Enfield. While the Classic 350 remains the most popular RE offering, we feel the Thunderbird fits the bill of a good touring option. 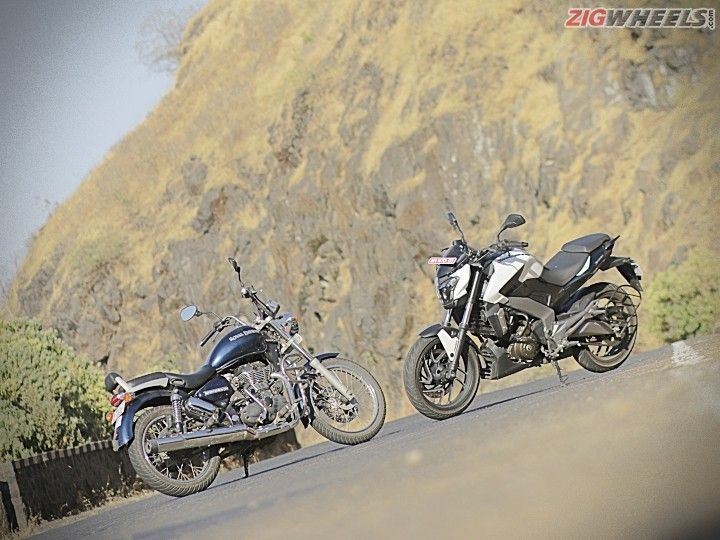 Royal Enfield has had such success in this space that it owns and defines this class of motorcycle. Rivals to the RE have played on the fringes, until now, as Bajaj has ridden in its new power cruiser – the Dominar 400. And it is bringing a new twist to the touring segment. The new motorcycle is the most powerful bike from Bajaj and made to please the modern cruiser motorcycle clientele. We pit these motorcycles against each other to find out if the young yahoo has the mettle and the soul to fill some big boots. 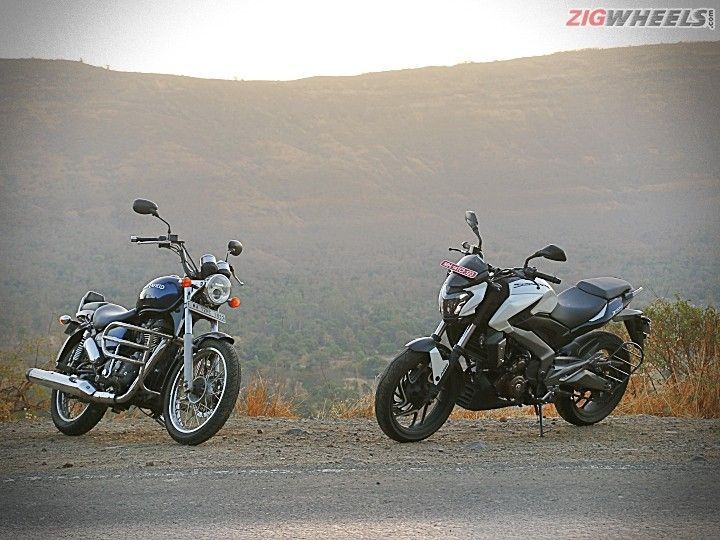 Park both the bikes next to each other and you will realise that they are as different as day and night. The Thunderbird 350 has a traditional cruiser styling with round headlamp, bulbous tank, large saddle and spoked wheels. In terms of sheer visual appeal, the Thunderbird 350 wins our heart with its simple and classy lines. Unlike other cruiser offerings that are drenched in chrome, Royal Enfield has used the bling element rather judiciously. 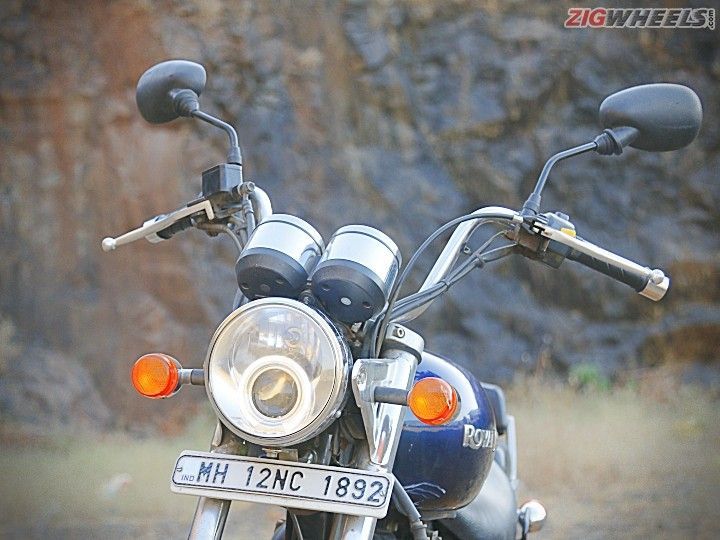 The projector headlamp and LED tail light are nice modern touches. The cruiser sports a twin-pod instrument cluster with an analogue speedometer and tachometer while there’s a small LCD display for fuel gauge, odometer, trip meter and clock. Fit and finish levels along with paint quality of the Thunderbird 350 is satisfactory. But the bike has been in production for close to 5 years and we feel Royal Enfield needs to update it. While the Royal Enfield is old-school, the Bajaj Dominar 400 is modern and sharp. The first thing that will catch your attention is the LED headlamp which is almost blindingly bright. The low-slung stance, machined alloys and the sculpted fuel tank does endow the bike with good presence. But we feel that Bajaj, which is normally associated with brave designs, have been conservative with the new bike. 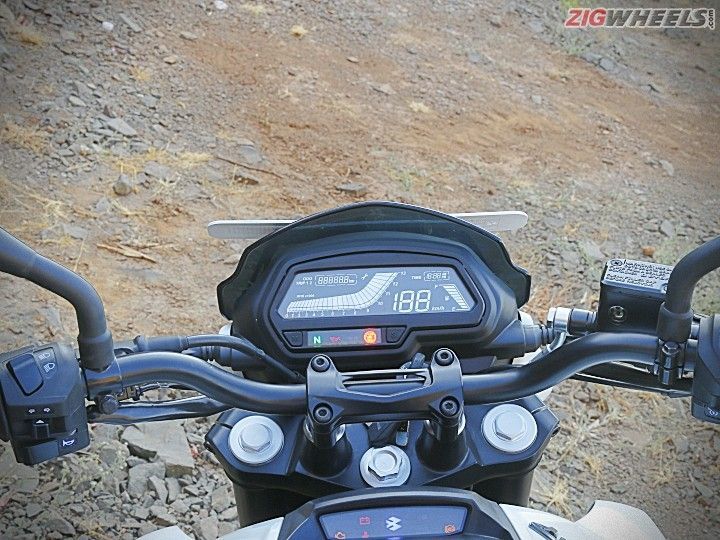 The Dominar 400 should have been offered in brighter colours with edgy graphics to help it stand out among its rivals, and the Pulsar NS200 lines are quite evident. Dare we say – give it some of the power cruiser flavour and help it establish its own identity. The all-digital display is loaded to the brim with details but misses out on a gear position indicator. Also, the shift light should have been positioned above the console as it isn’t in the field of vision of the rider. Switch gear is backlit and the overall fit and finish of the Dominar 400 is by far the best for any Bajaj product. 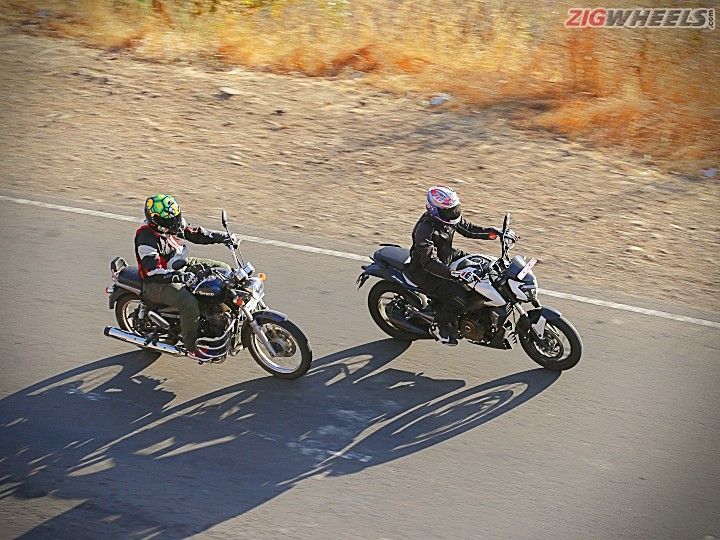 Let’s get the specifications out of the way before proceeding further. The Thunderbird 350 is powered by a single-cylinder, air-cooled, twin-spark engine delivering 20PS at 5,250rpm and 28Nm of torque at 4,000rpm. The 375cc, liquid-cooled motor on the Dominar 400 delivers 35PS at 8,000rpm and 35Nm at 6,500rpm of peak torque. As you can see, the difference in power figures is drastic and one short spin is enough to judge that the Dominar 400 is the faster of the two bikes. 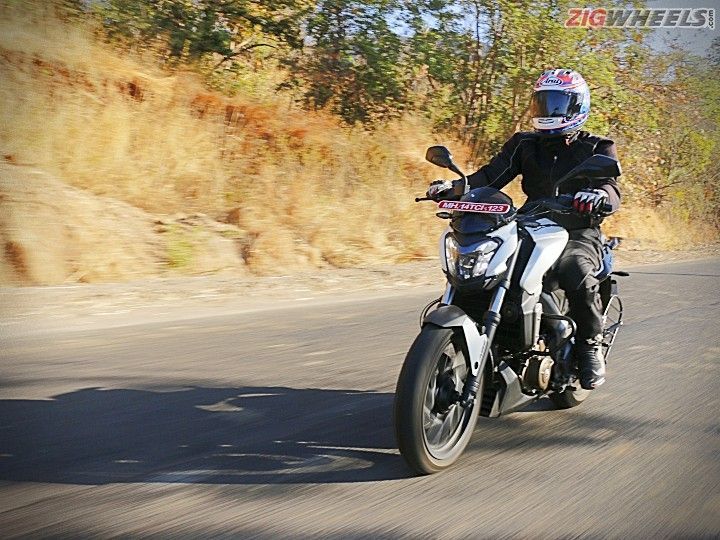 The Bajaj offering builds speed at a brisk pace and one can cruise at 100kmph all day long. Throttle response is good and the 6-speed gearbox also performs well. The gear ratios have also been well distributed and the engine feels very tractable. No matter what gear you are riding on, just a roll of throttle is enough to overtake. The gear ratios are also well spread out and riding the bike in city traffic was effortless but our test bike had some fuelling issues around 2,000rpm and throttle felt jerky. Refinement of the engine is decent but vibes kick in post 4,000rpm, which gain in intensity closer to the redline, and there is considerable wind blast at higher speeds. The above means that despite the potential of the engine, you won’t be riding at higher speeds for a longer duration. 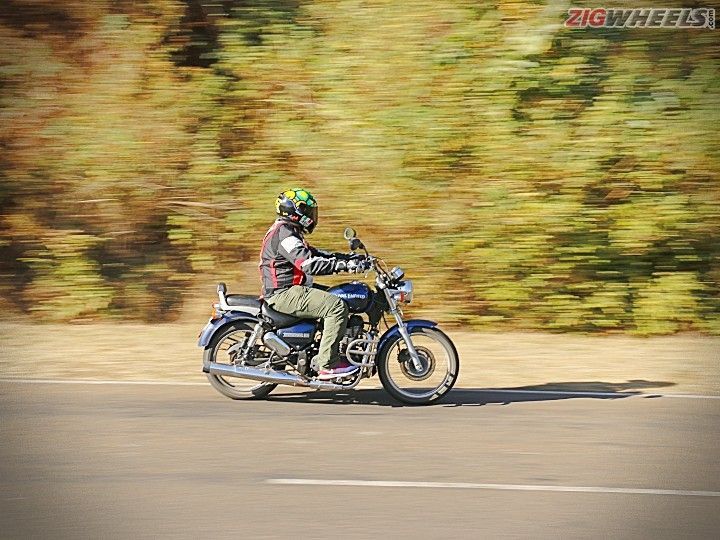 The Thunderbird 350 is lazy with respect to its power delivery and one has to wring the throttle to extract performance from the 350cc mill. One has to plan overtaking manoeuvres beforehand, unlike the Dominar 400. The bike feels at home chilling at speeds around 80kmph with a good bassy thump accompanying you in the background. But push it more and the engine revolts as harsh vibes set in via the handlebar and foot pegs. For its displacement, the performance of the Royal Enfield motorcycle is disappointing and on the mountain roads the bike felt a bit out of breath. In cityscape, the Thunderbird 350 fared much better as the low-end torque is handy while breezing your way past traffic. The 5-speed transmission is a bit temperamental but the shifts are positive. 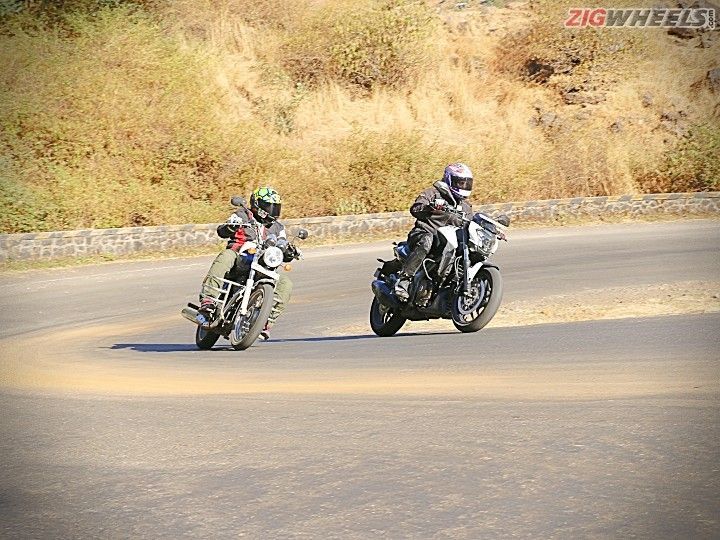 The Bajaj Dominar 400 employs a perimeter frame as seen on the Pulsar NS200 and RS200. But the rake angle of the bike is much more relaxed, to endow the bike with good stability at high speeds and a low-slung stance. Also the bike is considerably heavier than the Pulsar duo and has a longer wheelbase at 1,453mm. Handling performance of the bike is impressive despite the rake angle as it tipped into corners easily. Despite its 182kg kerb weight, the bike didn’t feel lazy on the mountain roads and changing directions on the bike is effortless. The chassis is very communicative and the MRF tyres offered very good grip, enhancing the handling dynamics of the motorcycle. Despite the rather long wheelbase and high rake, the Dominar 400 devoured the mountain roads, especially the sweeping corners. 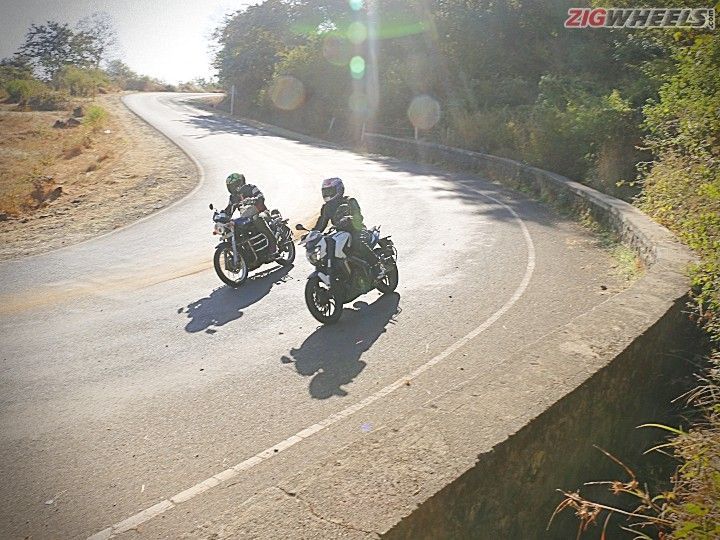 The Thunderbird 350 wasn’t far behind the Bajaj offering as it has among the best handling performance for Royal Enfield machines. The Thunderbird feels engaging to ride in corners but the footpegs get grounded easily, thereby restricting the lean angle. Having said that, the Royal Enfield couldn’t match the nimbleness of the Dominar 400 when it came to changing directions as it felt a bit lazy and heavy to steer. The Thunderbird 350 employs telescopic front forks and gas-charged twin shock absorbers at the back. 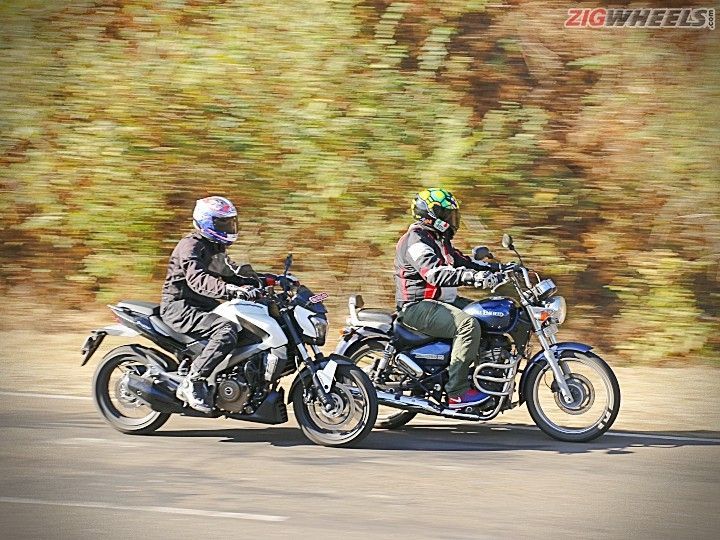 Ride quality of the 350 is good as the bike rolls over undulations and broken surfaces with confidence, although bumps at high speeds unsettle the bike. The Bajaj Dominar 400 is sprung on the stiffer side for better handling. I must add that the Dominar 400 that we tested offered better ride than the one we rode during the media ride in January. Overall, the Dominar’s ride is stiff and the monoshock unit at the back has a tendency to crash on broken roads, relaying a harsh jolt to the rider’s back. 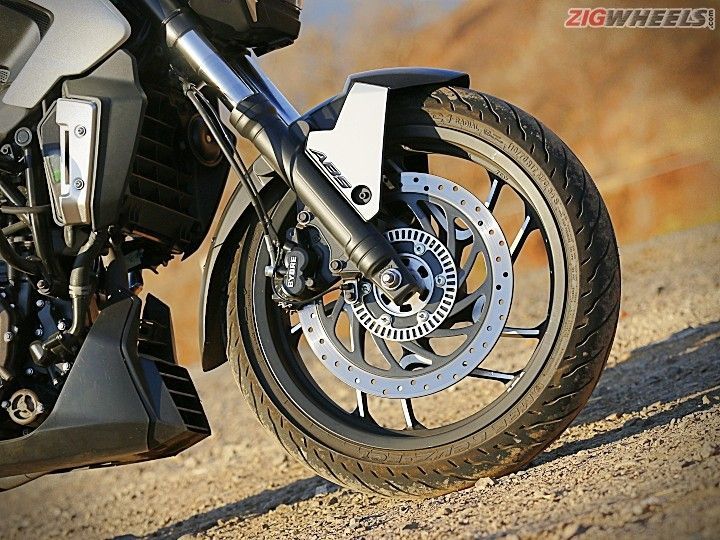 Large 320mm-dia front disc (the biggest in the segment) and ABS means that the braking performance of the Dominar 400 is impressive. The bike sheds speed swiftly while providing good feedback through the lever. The ABS system isn’t too intrusive, and if you are planning to buy the Dominar 400, we will request you to pay the Rs 16,000 premium and buy the ABS version for better safety. The Thunderbird 350’s disc brakes offered good stopping power but they couldn’t match the bite provided by the Dominar 400’s unit and we would have liked better feel through the lever. 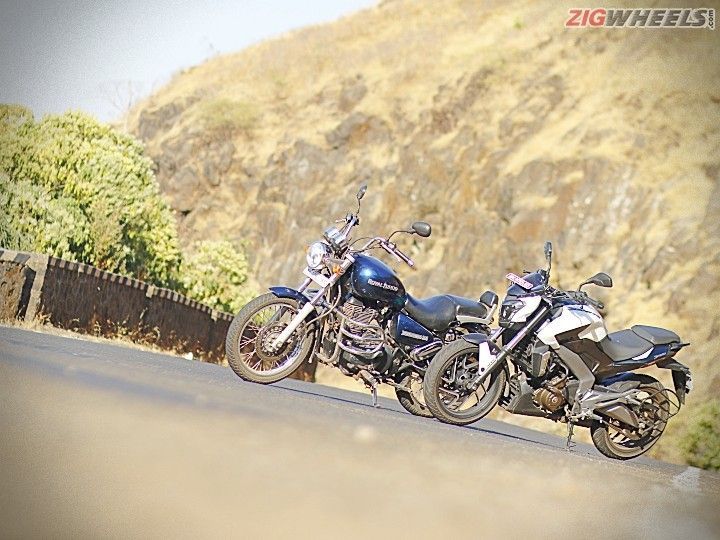 With respect to ergonomics and riding comfort, the Royal Enfield Thunderbird 350 felt better as the curved-back handlebars, forward-set pegs and the large saddle result in a comfy riding stance which will be useful while chugging miles on the highway. The Dominar 400 has a more street-bike riding posture, with the rider being slightly canted forward, and the wide handlebar. Pulling both the bikes out of parking lots can be a task as they are heavy but once on the move they mask their weight well due to good weight distribution. 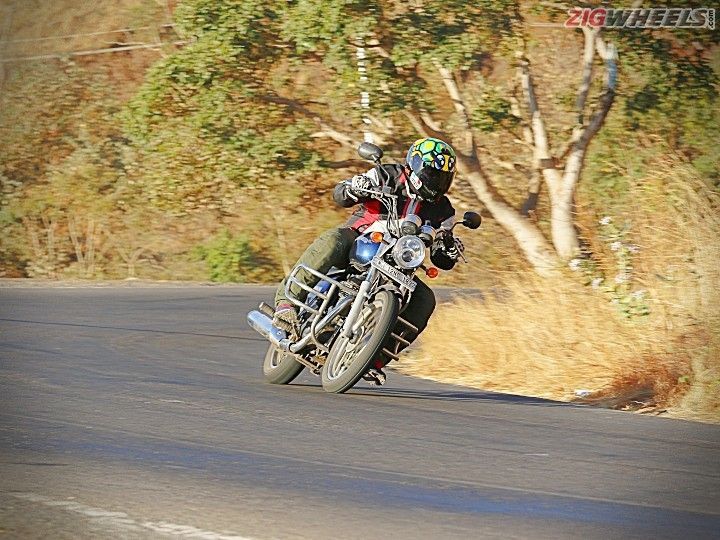 The saddle height of the Thunderbird 350 is quite low at 775mm while the Dominar 400 is higher at 800mm, making the RE offering more suitable for shorter riders. Both the bikes are easy to ride in city traffic but the Thunderbird 350 felt more agile and it was easier to thread your way through the traffic. The Bajaj Dominar 400 has a wide turning radius which means U-turns need to be planned better and the clutch is also heavier on the Bajaj offering. Also, on the broken city roads, it was the Thunderbird that offered better comfort but the low ground clearance of 140mm can be worrisome. The Dominar 400 is also the first Bajaj motorcycle to get slipper clutch, but still, the presence of it on a power cruiser is debatable. I slammed down from 6th to 3rd gear and was expecting the rear to step out and hop but except from the engine revolting there was no drama. 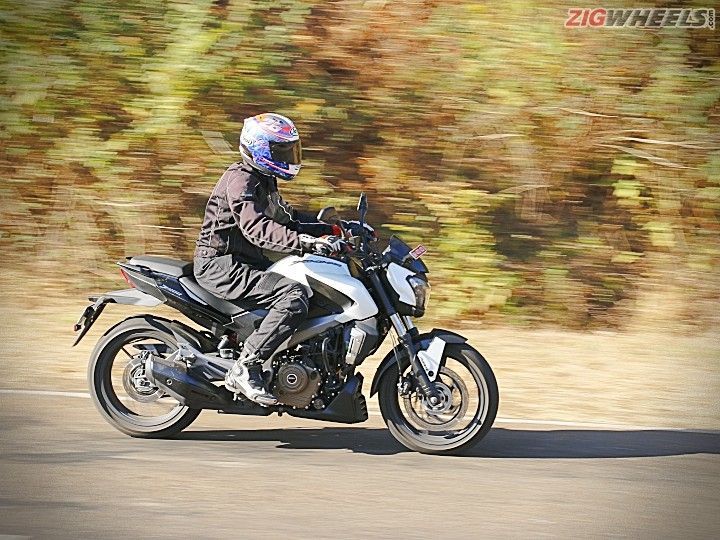 Talking about mileage, both the motorcycles return around 30kmpl in real world conditions. The Thunderbird 350 has a tank capacity of 20 litres while the Dominar 400 has just 13 litres, which means less fuel stops on the Royal Enfield offering while touring. The Thunderbird 350 also offered better comfort for the pillion rider, with the small backrest coming in handy. The Dominar 400 gets tubeless tyres while the RE motorcycle gets tubed tyres and punctures can be irksome, as we experienced during the photoshoot and wasted close to two hours in getting it fixed. 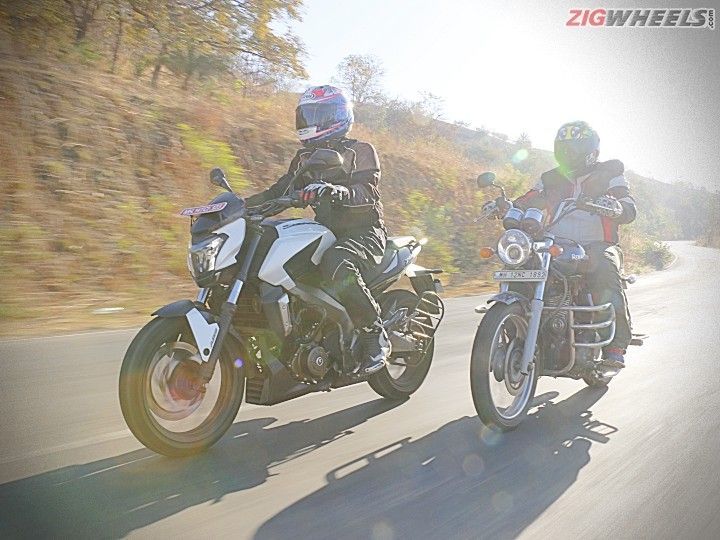 The projector light on the Thunderbird offers good luminescence but they are no match for the bright LED headlight of the Dominar 400 which is easily the best stock headlamp in its segment. And this is one aspect that is of great importance as our highways aren’t well lit and the deplorable road conditions mean having great visibility is very helpful. 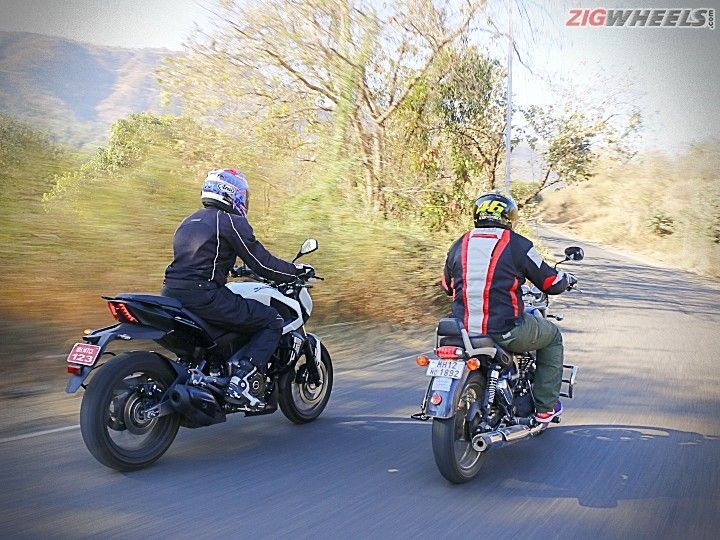 So it’s the Bajaj Dominar 400 that wins this comparison, and easily at that. Can it achieve the same popularity as the Royal Enfield bikes? We aren’t sure of that. But we know for a fact that as a motorcycle the Dominar is the superior motorcycle. It has been built based on the needs of a modern motorcycle buyer, with impressive performance, exhaustive list of features, and sporty handling. The Dominar 400 is capable of city commuting while being a reliable companion on the highways and it does both at a brisker and more entertaining pace. 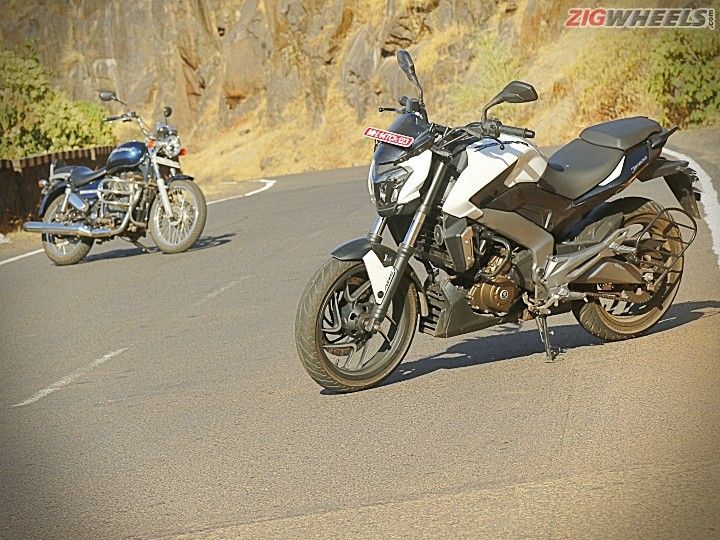 Yes, the vibes, fuelling issues, and stiff ride quality at the rear are a few of the drawbacks. The biggest drawback, though, isn’t about its hardware; instead it’s about the charisma and feel as motorcycles are beyond numbers and are more of a personal connect, which the Thunderbird 350 has. But when one looks at the motorcycle’s abilities and the price at which it is being offered, the Dominar 400 makes a strong case for itself. If you really want to buy the Royal Enfield Thunderbird, we will suggest you pay the extra cash and go for the Thunderbird 500 as it offers much better performance for a marginal drop in mileage.