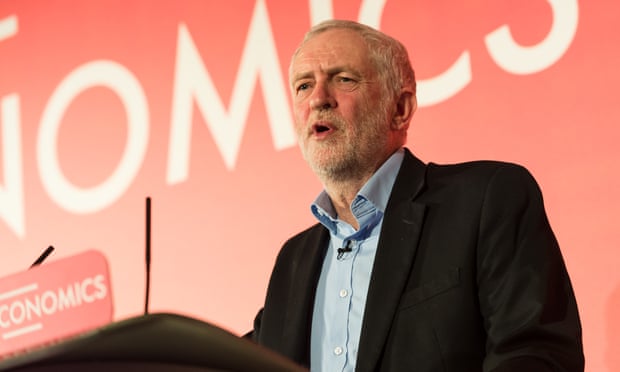 ‘Jeremy Corbyn might represent a break from neoliberalism, but we shouldn’t be mistaken into thinking that his past radicalism is being wholly maintained,’ writes Green party co-leader Caroline Lucas. Photograph: Wiktor Szymanowicz/Barcroft Images

Owen Jones’s discussion of tax seeks to put forward a “radical” agenda but is actually strikingly conservative, especially because of its focus on higher income tax rates (Tax radicals? McDonnell and Corbyn are not radical enough, 16 February). This focus is unhelpfully constraining for two reasons.

First, income tax now matters much less than it used to – it has fallen from over half of total UK revenue in the 1970s to about 30% today. There have been compensating rises in VAT and national insurance contributions, and the second of these especially is ripe for radical reform. Second, within income tax, the focus on the rates is far too narrow. How much tax is paid is hugely affected by the tax base, and the allowances given. The most indefensible of these is the allowance for pension contributions at the higher rates, a huge bonus for the better-off. George Osborne seemed to be shaping up to do something about these, but then bottled it.

A package of removing these pension allowances (or initially reducing them to the standard rate), and abolishing the near ceiling on national insurance payments (the rate falls from 12% to 2% at per £866 week) should be part of any radical agenda (this could be the start of a transition to merging NI with income tax).

Here in Scotland, devolution of control only over income tax rates and bands has acted to narrow most of the tax debate to a large extent, as we have seen in the recent arguments over the Scottish budget. For the UK as a whole, the options are much broader, but require thinking beyond higher income tax rates, which by themselves cannot deliver the revenue we need for any kind of radical agenda.
Jim Tomlinson
Professor of economic and social history, University of Glasgow

• Owen Jones is right to say that we need radical voices outside the Labour party to ensure that progressives continue to seek bold solutions to the many crises we’re facing.

We’ve already seen Labour back the government in handing a tax cut to the top 15% of earners through a threshold change, join the Tories in committing to a replacement of our multibillion-pound nuclear weapons system and refuse to vote against far-reaching intrusion into our privacy through the investigatory powers bill. Jeremy Corbyn may represent a break from neoliberalism, but we shouldn’t be mistaken into thinking that his past radicalism is being wholly maintained.

The Green party will continue to be bold, and offer more than just a radical alternative to the government but a serious break from an economics and politics that’s now hit the buffers. When it comes to tax, our alternatives are clear: we need a wealth tax, a land value tax and a rise in income tax for the wealthiest (and that must mean more than just the top 5% if we’re serious about saving our public services).

But we shouldn’t stop there. With the political sands shifting we also demand what was previously seen as impossible: a shorter working week and a basic income for everyone. This is no time for tinkering with a broken system: we have a new world to win.
Caroline Lucas
Co-leader of the Green party and MP for Brighton Pavilion

• Owen Jones makes a convincing case for higher personal taxation. But he does not mention national insurance as a possible vehicle for increasing the government’s income. NI is, in effect, an additional income tax, but one with several anomalies. First, pensioners do not pay NI. Part of the justification is that they have already paid for their pensions during their working lives. But pensioners are also big users of the NHS. Well-off pensioners might even welcome paying at least some NI if it guaranteed a fully functioning NHS and proper old-age care.

Another anomaly is the upper earnings limit above which, until 2003, no NI was paid. In 2003 Gordon Brown introduced a 1% contribution on earnings above this limit, currently about £45,000 a year, and in 2011 George Osborne doubled it to 2%. There is no reason why this extra levy, approved by both Labour and Conservative governments, should not continue to rise substantially.
Peter Pusey
Malvern, Worcestershire

• I hope there will be many “assertive voices” supporting Owen Jones’s call for greater tax radicalism from the Labour leadership. But before proposing specific policies Labour needs to (re)make the case for why taxation is not, as so often described, “a burden” but a shared citizenship responsibility. Without adequate, progressive taxation what hope is there for a civilised society with decent public services and public spaces and without widespread poverty, homelessness and gaping inequality? When, as Gaby Hinsliff tells us, “poverty is now so visible that even the richest can see it” (17 February), what better time for Labour to start a public conversation on taxation’s role in building a good society?
Ruth Lister
Labour, House of Lords

• Having read Gaby Hinsliff’s article, I am amazed how little council tax payers in Westminster are paying. In a previous article I read that taxpayers in the highest bracket pay £886 a year. We pay £2,650 a year for a three-bedroom flat in Glasgow. This is about average for that size of flat and is not even in the highest paying bracket. Perhaps if people in Westminster paid a more reasonable rate reflecting the value of their properties, there would be no need for voluntary contributions, and some of the problems of poverty might be alleviated.