NOIDA: During the BCCI’s annual conclave in Dharamsala in June, the BCCI president Anurag Thakur stated that feedback of players from the ongoing Duleep Trophy, played for the first time with a pink ball and under lights, would be critical to India’s prospects of hosting a day-night Test.

The pink ball debuted in India in June during the experimental CAB Super League final at the Eden Gardens, and has now been used in three matches of the Duleep Trophy held in Greater Noida. Ahead of the tournament final that starts September 10, TOI Sports spoke to a few cricketers who will feature in the summit clash – from both India Green and India Blue – to seek their views on the change in play.

In the tournament opener, Abhinav Mukund’s innings of 77 and 169 earned him the Man-of-the-Match award as India Red beat India Green by 219 runs. In the first innings, Mukund’s 77 was the only fifty (seven batsmen made single figures) out of a total of 161, while in the second his century helped carry the score to 486. Mukund, who played five Tests for India in 2011, has not batted again owing to one washout – he used the time out to fly back to Tamil Nadu to play the TNPL – but on the basis of his performance in the first game he felt that the challenge of facing the pink ball was not much.

“It wasn’t hard, to be honest. Maybe on that first afternoon when there was a bit of dew, but otherwise I had little problems,” he said. “Of course in tougher conditions the challenges will be greater, but in the afternoon and evenings there were not that many adjustments to be made, from a personal account. No reverse swing, not a whole lot of turn.” 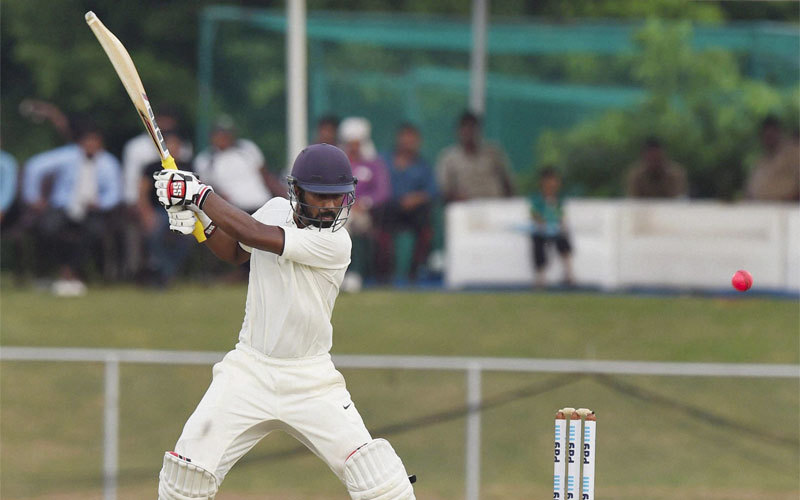 With 311 runs in three innings, Karnataka batsman Mayank Agarwal is the leading scorer of the Duleep Trophy. As an opener, he found that against the pink ball batting was easy after the first eight or ten overs but also readily admits that the conditions in Greater Noida were not very challenging.

“There was hardly any reverse swing, which made it frankly easier to bat at the top of the innings, because as an opener if you are able to get through the first ten-odd overs without much trouble, you back yourself to convert starts,” says the 25-year-old, whose trips to the crease in Greater Noida have produced scores of 92, 161 and 48 for India Blue. “There was a glaze on the ball but no reverse swing, though the ball did wobble a bit early on. It came onto the bat well, and I felt that in the two matches we’ve played so far the batsmen didn’t have much to worry about.

“However, so much depends on the kind of surface you play on. In Noida we’ve seen good batting wickets, so I will be able to judge properly only after playing in tougher conditions where the ball could do a lot more.”

Agarwal, whose success in the competition has lifted his first-class batting average to above 42, did not have to make much adjustments against the pink ball as the lights came on and once the sun set. “I had a few initial problems, but once you get set there wasn’t much difference in approach, like when you play under lights against the white ball. If you see, spin has accounted for most of the wickets in this tournament and personally, I found it hardest to pick the wrist spinner [Kuldeep Yadav] at night. Overall, it’s been a positive experience and I welcome the introduction to have more pink-ball matches in domestic cricket,” he says.

Offering a fast bowler’s perspective is Agarwal’s Karnataka and India Blue team-mate Abhimanyu Mithun, who feels the absence of reverse swing in Greater Noida did not make it easy for the quicks. Mithun has played just one match, taking 3/16 in seven overs during India Green’s innings and bowling four wicketless over in their second.

“There was no reverse, which you need on Indian surfaces, especially when the ball is old. But here the ball has not remained hard as long as the red ball does; I found it got soft after 30-35 overs,” says Mithun, who played four Tests and five ODIs for India between 2010 and 2011. “The red ball, at least one side stays hard as long as 80 overs but that wasn’t the case here, which made it challenging for fast bowlers. One side has to stay hard, but I didn’t see that with the pink ball. We can only say more after we see more matches and on various pitches.”

“We saw during the Eden Gardens match that the surface was very green, and pace bowlers did well. But in Noida the surface did not assist reverse swing at all,” he said. “You expect some assistance when the ball is old, but that wasn’t really an option here. These were drier wickets, and also there didn’t seem to be very thick coat of lacquer on the balls we bowled with. I believe that is a big factor, from what people are saying about pink balls overseas. Also, the seam was not as prominent as we expected of a Kookaburra ball. But as a venture, I think playing pink ball cricket is a good idea and more matches will give us all a better sense of what is possible.”

The leading wicket-takers are Karnataka legspinner Shreyas Gopal (14) and Uttar Pradesh chinaman bowler Kuldeep Yadav (13). For Dinesh Karthik, this is no surprise because while there has been minimal turn, picking these two has not been easy under lights. “It’s interesting that the wristspinners are the ones who have done well in the tournament, because they put that much more effort in and as a batsman, picking them with the pink ball was at times tough. They’ve gone for a few runs, but have been rewarded for plugging away on surfaces that have not assisted spin,” he said.

Karthik has been a central figure in the India Blue middle order, with scores of 35*, 48 and 57. For the veteran wicketkeeper-batsman, the adjustments needed to play against the pink ball under floodlights were minimal but in his view there was room for improvement.

“It wasn’t that tough to sight once you got used to that initial period at twilight, with the lights taking effect. Early on with the ball dropping out of the hand against the light it was tricky, but there on it was OK,” said Karthik. “As a batsman you have to be aware of that skidding delivery, particularly when it’s short in length, when playing the pull shot. There were times it felt like I was batting against a synthetic ball, with that sort of bounce. As a wicketkeeper, I had the gloves on but I know the guys were talking a fair bit about how the ball was getting soft. I would say around the 40 or 45th over was when it was being discussed. That’s significantly lesser than with the red ball.”

Mukund believes the Duleep Trophy’s new format is a step in the right direction, particularly when looking at garnering more eyeballs. “You have to ask the question: what is the aim of playing pink ball cricket in India? From a spectator viewpoint it’s been good to see such crowds come to watch, and that’s what you want – more people watching in stadiums,” he said. “The prospect of a day-night Test match in India is exciting and that’s what the BCCI is trying to achieve, and I think with more efforts its a real possibility. Pink ball cricket can really promote the game.”

Adds Karthik: “The nature of wickets will need to be looked at, for sure. Early days, and I’m sure the BCCI will have plans to keep experimenting and improving this. Overall, a good move.”