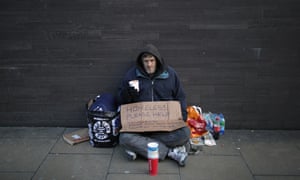 At least 200 of Greater Manchester’s most entrenched rough sleepers will be given new homes, and the support needed to stay in them, after a £1.8m grant from an ethical investment fund.

Under the scheme, financed by the social impact bond, 15 of Greater Manchester’s housing providers, as well as two private-rented sector partners, have offered 270 properties for homeless people. The plan forms part of the new Greater Manchester Homes Partnership.

The properties range from one-bedroom flats to shared houses and supported accommodation, according to Dave Power, chief executive of One Manchester, the biggest social housing association in the city.

Besides gaining the key to a new home people will be offered “intensive support to sustain tenancies” as well as help with addiction and other health issues, plus training and employment services.

“Our experience of housing a rough sleeper straight in a one-bedroom flat in one of our tower blocks is that the tenancy has failed,” said Power. “Why has it failed? Because it’s not had the right sort of wrap-around support.”

To qualify, individuals must have slept rough at least six times in the last two years and, or, be well known to homelessness services. Most of those are men with multiple failed tenancies under their belt, and many will have mental health problems and addiction issues, according to local experts. Many have a criminal record.

The money, which comes partly from the region’s £17bn public-sector pension fund, is an aspect of the pledge by the Greater Manchester mayor, Andy Burnham, to eradicate homelessness in the area by 2020. When he took office in May, Burnham immediately announced that he would donate 15% of his £110,000 annual salary to tackling rough sleeping.

In Greater Manchester last year there was a 41% year-on-year rise in rough sleepers. During the last annual count, in November 2016, there were 189 people found spending the night on the streets. Charities say the real numbers tend to be about three times those officially recorded.

Amanda Croome, chief executive of the Booth Centre, a homeless charity in Manchester, welcomed the initiative but warned that another increase in rough sleeping was likely because of the introduction in the city this month of the benefit known as universal credit; Salford was to follow with this benefit in 2018.

Burnham said the new housing scheme should not prove controversial to the people of Greater Manchester. The number of people on Manchester city council’s waiting list for social housing is now 12,900.

“The people of Greater Manchester are fair minded, decent, people who can recognise when people are in greater need than they are. Often people are not in that position because of something self afflicted but [because of] a traumatic event in their life … and I think they would recognise that they should be supported and not left out in the cold,” said the mayor.

The £1.8m investment comes from Bridges Fund Management, which manages funds on behalf of many investors, including the Greater Manchester pension fund. As well as paying to make the homes suitable for their new owners, the money will be used to buy support services from the homeless charities The Brick, based in Wigan, and Shelter.

The government has promised to pay back the money if the scheme is successful in housing rough sleepers and getting them off the streets after three years. It has promised an average of £9,000 for each individual, up to a maximum of £19,000.

Burnham said the scheme was designed not just to solve rough sleeping but also to save money for the health service and criminal justice system.