Home
/
Education
/
We, the Rohingya youth, demand our right to an education 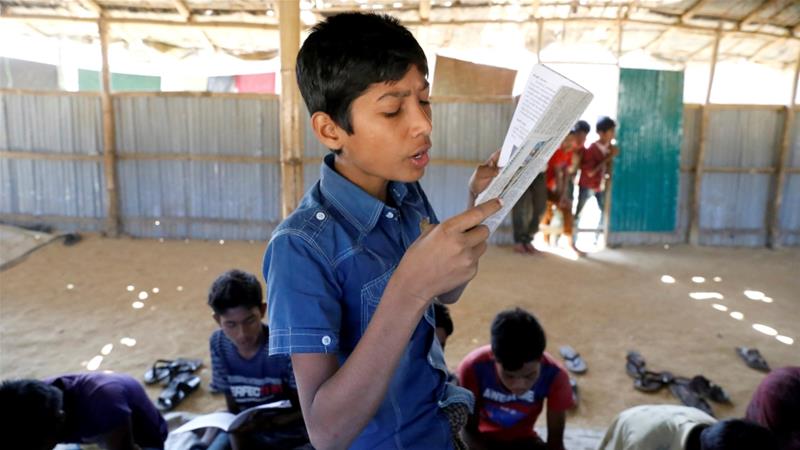 In the summer of 2012, when a particularly gruesome episode of anti-Rohingya violence erupted in the capital city of Myanmar’s Rakhine state, Sittwe, I was a second-year physics student at the town’s university.

Sittwe’s Buddhist residents were attacking Rohingya homes and businesses with makeshift weapons. Soldiers, who had allegedly been sent to the town to help bring an end to the violence, were shooting at the Rohingya with live ammunition.

As a young Rohingya Muslim, I knew that if I went outside I would be tortured and killed either by angry Buddhist mobs or military troops. So, I hid inside my dormitory room. After spending a week in hiding without any food or other supplies, I was informed by the immigration authority that I was no longer a student – I was banned from Sittwe University and denied an education as a result of the racial segregation plan Myanmar authorities imposed in the name of “keeping the peace”.

A few days later, I was forcibly sent back to my hometown, Maungdaw, which is situated in Rakhine state, near Myanmar’s border with Bangladesh. But I did not find safety there either. Security forces were regularly raiding Rohingya homes and dragging away anyone they found inside. They were specifically targeting the young and the educated who they viewed as a threat to their authority. We later found the dead bodies of some of the abducted, while others are missing to this day.

As it was not safe for me to go home, I hid in the jungle with my friends for about two weeks. When it became clear to me that I would never be able to safely return home, I decided to leave Rakhine state for good. After a terrifying journey on a small paddle boat with several other Rohingya, I reached Bangladesh. Most of the people I travelled with chose to remain in the safety of Bangladesh’s refugee camps, but I still wanted to live and study in my own country, Myanmar.

I decided to make my way to Yangon, Myanmar’s most populous and cosmopolitan city, where I had heard Rohingya were allowed to register with the local government and live as temporary residents. Since I did not have a passport or any other travel document, I risked my life illegally crossing first from Bangladesh into India and then from India back into Myanmar. But when I reached Yangon at the end of my arduous journey, all I found there was more anti-Muslim and anti-Rohingya racism and hatred. The entire country was turning against us.

I eventually had to accept the fact that I was not welcome in my homeland. My plan was to seek refuge in Australia, where I thought I could continue with my education. In February 2013, I fled to Thailand by car, passed through Malaysia and took a boat to Indonesia. From there, I attempted to go to Australia by boat but got caught. I spent a year and a half in the Manado Detention Center in Indonesia. But while there the UNHCR recognised me as a refugee and I was eventually transferred to International Organization for Migration’s (IOM) community housing in the port city of Makassar in eastern Indonesia.

Since then, I have been stuck in limbo in Indonesia. I spent the last seven years searching for a way to continue my education, but I have not been successful. I know I will never be allowed to integrate into Indonesian society and receive a university education here. I also have no hope for resettlement in a third country. Given the increased hostility Rohingya are facing in Myanmar, going back home and leading a normal, productive life there is nothing but a dream for me.

And my story is not unique. Thousands of young and able Rohingya eager to study, learn and contribute to their society are languishing either in their own villages and towns in Myanmar where there are no schools and universities for them to attend, or in migrant detention centres, refugee camps and other “temporary” accommodation outside Myanmar with no access to education.

Even our small migrant community in Makassar is full of such people. Sajed Durahaman, a 42-year-old Rohingya refugee, was accepted to study geology at Thain lilwin university in Yangon but was stopped by the government from taking up his place there. Instead, he was forced to wait three years before he could attend Sittwe University, only to be forced out from the country a few years later. Musa Ahmed, a 25-year-old Rohingya, who graduated with a distinction in biology from high school in 2012, was similarly not allowed to attend university in Myanmar. Their disenfranchisement from education continues in Indonesia.

Today, the world sees Rohingya as desperate, simple village people. But this was not always the case. We are the indigenous people of Arakan, which was renamed Rakhine State in 1989 at the same time Burma was renamed Myanmar, and have played a primary role in building a civilisation there. And until very recently there were many Rohingya occupying prominent posts in Myanmar’s government bodies, from police to Parliament.

Sultan Mahmud, for example, a prominent Rohingya leader, served as cabinet secretary in the British India legislative Assembly. He later served in former Prime Minister U Nu’s cabinet as health minister. During his time as health minister, numerous health centres, hospitals and schools were established in Rakhine. He was also responsible for sending many Rohingya students to England on state scholarships. Shwe Maung, another prominent Rohingya, served as a member of parliament in the House of Representatives for Buthidaung constituency from 2011 to 2016, but was eventually removed due to his advocacy for Rohingya rights and his ethnic identity. In my hometown, one of my own neighbours, member of parliament Fazal, also a Rohingya, served for years in Myanmar’s Parliament before being removed for his advocacy on behalf of the Rohingya people.

Today, Myanmar is not only excluding Rohingya from all state institutions but also trying to erase this history. The government is trying to present the Rohingya as an uneducated, uncultured and criminal village people rather than the highly developed community with a distinct culture and language that we are. We have greatly contributed to the development of Myanmar in the past and despite everything that we have been through, we still have the ambition to contribute to the country we call home.

Over the years we undoubtedly fell behind as a result of the oppression we have been subjected to. After all, people who are unable to house themselves, do not have access to sufficient nutrition and healthcare, people who receive no support from their government and are categorically denied access to education, inevitably fall behind. But this does not mean we do not have the will, potential and capacity to help the development of our country.

A 1982 Citizenship Act excluded us from Myanmar’s 135 recognised ethnic groups, effectively rendering us stateless. The government said we are not indigenous to Myanmar, but just Muslim migrants from Bangladesh who arrived during British colonial rule. Authorities still call us Bengali, suggesting we are “illegal immigrants”. We have been denied the most basic human rights.

Despite all this, many of us did not give up. Thousands of Rohingya youth like myself pushed against all these obstacles to obtain an education. The Myanmar government was not happy about this, because they know that educated Rohingya would pose a great risk to their apparent plan to remove every single one of us from the country. This is why they specifically target the young and the educated during their “clearance operations” against us.

This cannot be allowed to continue. The world needs to hear the plight of the Rohingya. We need a permanent solution and not incremental fixes. The international community needs to take immediate action and pressure the Myanmar government to remove the 1982 citizenship act. We should be given a chance to not only safely return to our homes, but also live there with security and dignity.

While I acknowledge that all this is not going to happen overnight, there are things that can be done to help Rohingya today. The international media can change the way they represent the Rohingya. They can resist buying into Myanmar government’s propaganda and stop talking about us as if we are ignorant, uneducated victims and start acknowledging what we really are: A proud, intelligent and capable people who have contributed greatly to the building of contemporary Myanmar. The international community can take action to help generations of Rohingya youth who have been targeted simply for pursuing an education. They can create opportunities for us to continue our education outside of Myanmar so we can more effectively fight for the wellbeing of our people and our country.

We need the world to stop painting us as passive victims, and see us as future leaders in exile.