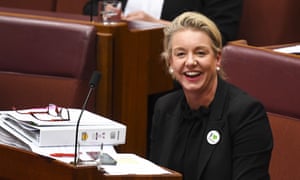 Clubs which missed out on federal funding under the $100m sports program overseen by Bridget McKenzie could bring court cases to overturn the former sports minister’s decisions, lawyers from two plaintiff firms have said.

Slater and Gordon is investigating the possibility of a class action and Maurice Blackburn principal lawyer, Josh Bornstein, has offered to work pro bono for clubs which were denied funding under a program the audit office found was targeted at marginal seats.

Both cite the fact the Australian National Audit Office report said it is “not evident to the ANAO what the legal authority was” for McKenzie to approve grants.

McKenzie has defended her handling of the program, insisting that all projects granted funding were eligible and “no rules were broken”.

Bornstein told Guardian Australia “it looks like the minister didn’t have the power to approve grants [and] the minister effectively usurped the role of Sports Australia … they were just steam-rolled”.

“That gives rise to question whether clubs can go to court and quash the grants that have been approved and ensure the process is conducted with integrity,” he said.

Bornstein said he was “interested in conducting” a test case or class action on a pro bono basis, suggesting there would be “no shortage of volunteers from the legal community” to assemble a crack team.

“Ideally the sorts of sporting club I’m looking for is someone who was entitled to the grant on merit and lost out on as a result of the minister’s intervention.”

Slater and Gordon class actions practice group leader, Andrew Baker, said that “every dollar that went to a club whose application should have been unsuccessful is a dollar that didn’t end up with a club that Sport Australia had identified and recommended for funding in the course of proper processes”.

“These community organisations, clubs and groups have lost out because it appears public funds were used for political gain,” he said in a statement.

Baker said the audit office report “raises serious questions about the lawfulness of the conduct involved”.

In a scathing report, the auditor general found that 70% of projects approved by the minister in the second round in March 2019 were not recommended by Sport Australia, rising to 73% in the third round in April 2019 after an extra $40m was tipped into the program.

“A significant shortcoming was that, while the program guidelines identified that the minister for sport would approve [community sport infrastructure grant] funding, there are no records evidencing that the minister was advised of the legal basis on which the minister could undertake an approval role, and it is not evident to the ANAO what the legal authority was,” the ANAO report said.

It noted that although the sports minister has a power to direct Sports Australia “it was not used”.

Labor leader Anthony Albanese, independent MP Zali Steggall and One Nation leader Pauline Hanson have all called for McKenzie to resign over the program.

A Senate inquiry is likely, as Labor has vowed to expose the projects recommended by Sports Australia that were denied funding by ministerial intervention and the Greens, Hanson and Centre Alliance have offered to support an inquiry.

Scott Morrison is yet to comment on the scathing audit report, after days of bad headlines including a $500,000 grant to Mosman Rowing Club in Tony Abbott’s seat of Warringah, Labor MP Graham Perrett being excluded from the announcement of a grant he helped lobby for, and a $500,000 sports grant in the rural Victorian seat of Mallee a year and a half after it was first rejected when the seat became hotly contested due to the resignation of Nationals MP Andrew Broad.