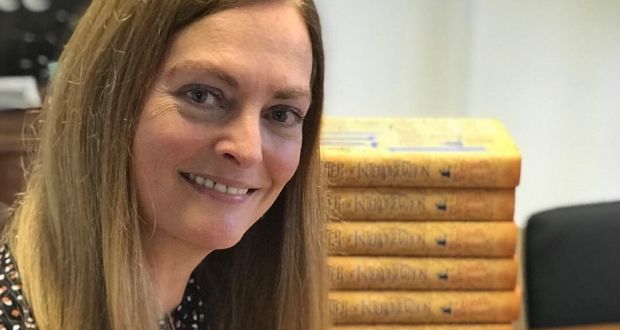 Knowledge is power. Ideas matter. People have died, and continue to die, for ideas. But we live in times when the few are trying to gain a stranglehold on the dissemination of knowledge and facts by withholding them and flooding the world with factoids and fake news. The political turmoil evident in the UK and the US in large part stems from this and the whole destabilising phenomenon has been given the name of populism, which the poet and translator, George Szirtes, has described as “the revenge of the inarticulate”. Szirtes also maintains that the liberal part of society has created its own forms of elitism, which have led to this current backlash.

This may seem like a peculiarly contemporary problem, but as I researched my historical novel, A Matter of Interpretation, it became obvious to me that not only was the struggle to maintain control over knowledge as old as the concept of society, but that populism was also at work. The devastation it wreaked served as a chilling wake-up call.

I have always been fascinated by the figure of Frederick II, Holy Roman Emperor. At the beginning of the 13th century he attempted to create a humane, enlightened empire with open access to learning. I began to explore his court in Palermo, Sicily, noting how the coming together of the disparate strands of Sicilian identity – Norman, Greek, Pisan and Saracen – had led to a high level of civilization and, under the rule of Frederick, a stable society.

This was an instance of convivencia that I was to find again in Spain, notably in Toledo. But before I got to Spain, I had to do a lot more research, and it was during this that I found my protagonist. Looking into Frederick’s childhood, I came across his tutor, a cleric from the barbarian north of Europe called Michael Scot. Gifted and wayward, this Scotsman had achieved fame as a mathematician of brilliance at Oxford. The pope was the young Frederick’s guardian and it was he who chose Michael Scot for the position of tutor in Mathematics and Natural Philosophy for the future Holy Roman Emperor. I immediately knew that my story would centre on this enigmatic northerner with his outsider’s vision of the Mediterranean world he found himself catapulted into.

When Michael Scot discovers a manuscript written in Arabic in the cathedral library in Palermo, he understands that it contains some of Aristotle’s lost knowledge in the field of natural philosophy. He drives home the groundbreaking importance of this to the young king, Frederick, who commissions him to continue this crucial work at the renowned Translation School in Toledo.

And so begins Michael Scot’s quest in Spain. In Toledo he is again witness to the benefits of convivencia, as he avails of the expertise in Arabic of his young Jewish assistant, Jacob Anatolio. Then he travels to Córdoba, capital of the Western Caliphate, where he is shown the wonders of that beautiful city. It is home to half a million souls, and boasts indoor sanitation arrangements, street lighting, and a library that contains more than 600,000 volumes. It is also the city where Maimonides and Averroës were born. But Michael Scot soon discovers that a more disturbing reality lies hidden beneath the glittering surface.

There has been an ongoing feud between the theologians and the philosophers, or faith and reason respectively, and the theologians have gained the upper hand. Averroës had been an exponent of the philosophers’ faction and Michael Scot has come to Córdoba to study more of his works, as the Muslim scholar has been the filter through which Michael Scot has regained Aristotle.

But to his consternation he is told that there is nothing left of Averroës in his native city of Córdoba, where this mighty pinnacle of knowledge and learning had come to an inglorious end. All that remains of the man’s life’s work now appears to be in Christendom. The caliph had been his father-in-law, but not even this had saved him. The theologians had used the people in their feud with the philosophers, imputing all manner of abstruse, irreligious and blasphemous beliefs to the latter faction. In this way an abyss was created between the people and the philosophers; their voice of reason was no longer trusted, but seen as deviant and corrupting.

Instead of providing strong leadership at this crucial juncture, and despite having previously esteemed the philosophers, the Almohad ruler in al-Andalus pandered to the violence and fear of the people, allowing the philosophers be stoned and exiled and their books burnt. In this way the balance of power in the administration of knowledge was tipped overwhelmingly in favour of the theologians.

The same fate was meted out to Averroës’ Jewish contemporary, Maimonides.

Christendom was experiencing its own share of religious upheaval. The Crusades were on the go. The Albigensian massacres were taking place. The word heresy was on everybody’s lips – an offence for which the solution was instant and painful death, usually by fire.

And yet the early 13th century was also a tipping point in Christendom in terms of the relationship between knowledge and power. It saw the rise of the universities as autonomous bodies of learning, removed from the control of the bishops. Where previously Christendom had had two administrators of knowledge and power – Regnum and Sacerdotium – now Studium was added to the equation. It surprised me to learn that this development was enabled by the pope himself. As long as he remained chief arbiter of what could be studied, the faculties were free to teach and discuss it, free of episcopal censorship, as they pleased.

Regnum and Sacerdotium continued their stand-off, but increasingly Studium stepped in to comment on this.

I feel strongly that, as Santayana has it, “if we do not remember the past, we are condemned to repeat it”. That is why historical fiction has its place in the scheme of things. Time is not a straight forward-moving arrow; I see it like the dual-stranded helix. The past may be visited and some truth gleaned there that can inform our present and shape the future.
A Matter of Interpretation by Elizabeth Mac Donald is published by Fairlight Books