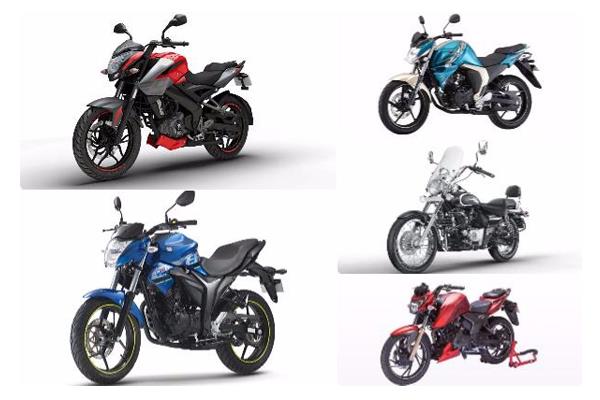 Even though the Indian two-wheeler space has really taken off in the last decade or so, most of us enthusiasts wish that Indian bike makers would offer a larger variety of motorcycles in the ‘affordable’ category. That being said, there are some rather interesting offerings now available in the country that can be had under Rs 1 lakh. So we’ve compiled a list of the top five bikes you can get today that fit this bill. And even though the definition of ‘best’ can be rather subjective, for this list, the contenders really need to offer something greater than run-of-the-mill to make the cut, be it great bang-for-buck, or just a tonne of personality.
Before we start, we’re going to admit that this ‘under Rs 1 lakh’ title is a bit of a misnomer. For the sake of this list, we’re considering the best five motorcycles which have their ex-showroom (Delhi) prices under a lakh of rupees, so their actual on-road prices might go a little over.

Note: All the prices mentioned here are post-GST.

Yamaha FZ-S Fi
The Yamaha FZ16 really changed the game when it arrived on the scene back in 2008. It really showed off what was possible in the 150cc category, a segment that was getting a bit stale after it was kick-started in a big way by the original Hero Honda (sic) CBZ. It packed a strong motor, superb handling characteristics and most importantly, class-redefining style. The year 2014 saw the launch of the v2.0, the FZ-S Fi, which built on the strengths of the original bike and brought a massively refined fuel-injected 149cc motor to the mix. It might have a slightly lower output as compared to the original bike (13.2hp of peak power and 12.8Nm of peak torque to be exact), but it more than makes up for this with a lighter kerb weight of 132kg. So performance is just as sprightly, and even today it maintains a road presence that’s just as, if not more, distinctive. 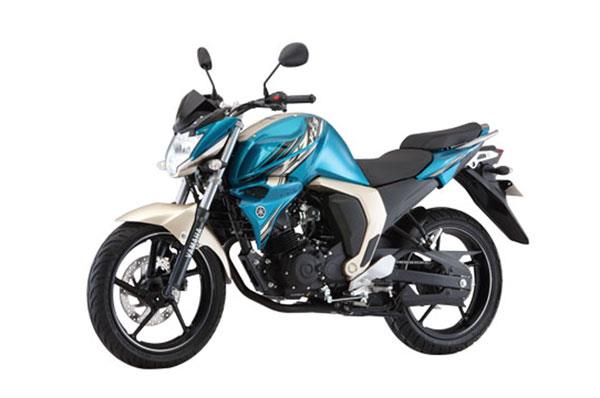 Power: 13.2hp at 8,000rpm
Torque: 12.8Nm at 6,000rpm
Price: Rs 83,042 (ex-showroom, Delhi)
Also read: Yamaha FZ-S review
Bajaj Avenger 220
The Bajaj Avenger has been the mainstay of Indian-made cruiser motorcycles ever since it debuted back in 2005. The bike has seen many iterations over the course of time and is currently available in 150cc and 220cc guises. The Avenger 220 uses the carburetted 220cc, single cylinder, air-and-oil-cooled, DTS-i motor from the Pulsar 220, albeit in a state of tune that’s more suited for a cruiser. Even though it’s slightly down on power and torque as compared to the Pulsar, it has a wider torque curve aimed at delivering a strong low-to-mid range pull. The bike is available in two trims – Street, which comes with alloy wheels and flatter handlebars, and Cruise, which has wire spoke wheels, tall handlebars and even a tall windscreen as standard. While the Avenger 220 isn’t meant to be a performance bike by any means, it does pack a healthy punch and there’s no denying its extremely stylish design. 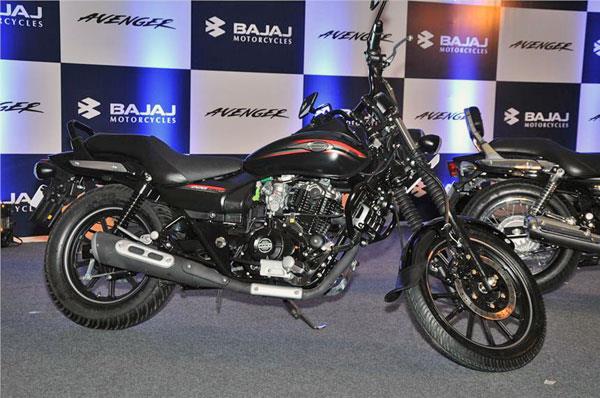 Power: 19.03hp at 8,400rpm
Torque: 17.5Nm at 7,000rpm
Price: Rs 87,738 (ex-showroom Delhi)
Also read: Bajaj Avenger review
TVS Apache RTR 200 4V
The TVS Apache has always been an interesting proposition in the Indian bike market, as being the only bike that was developed on the race tracks of Chennai and Coimbatore. The blokes at Hosur have always taken racing seriously and they took this approach to take motorcycles to a whole new level with the Apache RTR 200 4V. As the name suggests, it packs a 197.75cc, single-cylinder, air-and-oil-cooled engine that gets a four-valve head and was derived from the company’s racing efforts. The RTR 200 also features a race-tuned KYB monoshock at the back and gets sticky Pirelli tyres as well as dual-channel ABS as standard (a first for this segment). It’s available in both carburetted and fuel-injected variants, although we’re not considering the Electronic Fuel Injection (EFI) version here as its asking price goes beyond the one lakh rupee mark. With its rev-happy motor and razor sharp handling, the RTR 200 is an impressive motorcycle – impressive enough to be crowned the 2017 Bike of the Year here at Autocar India. 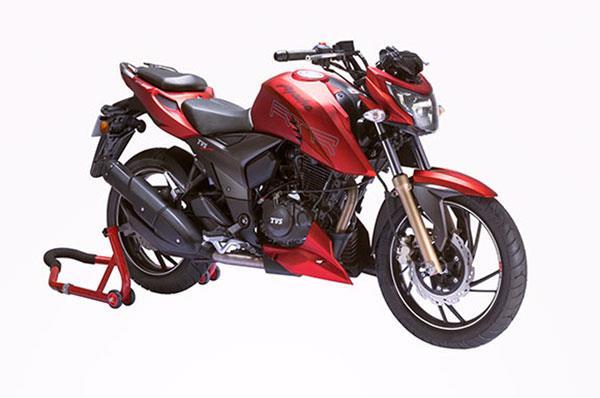 Power: 20.5hp at 8,500rpm (carburetted version)
Torque: 18.1Nm at 7,000rpm
Price: Rs 97,915 (ex-showroom Delhi) (with Pirelli tyres)
Also read: TVS Apache RTR 200 review
Bajaj Pulsar 200NS
The second Bajaj bike on this list, but let’s face it… it really had to be here. The Chakan-based two-wheeler giant knows a thing or two about making bikes that offer phenomenal bang for your buck, and the Pulsar 200NS is a prime example of this. After a short hiatus from the market, the 200NS has been brought back as a BS-IV model and it packs the same 199.5cc, single-cylinder, liquid-cooled motor derived from the KTM 200 Duke. Unlike the KTM however, the Pulsar’s motor is fed through a carburettor, but it features Bajaj’s patented triple-sparkplug technology which makes it a lot more efficient, albeit slightly down on power. The Pulsar’s short-stroke motor is quick to rev, making for fast acceleration, and the bike offers a competent handling package which makes the bike fun to ride in pretty much all conditions, whether in the city, highway or a twisty mountain road. “Power to the people” has been the Pulsar hallmark ever since the brand’s inception, and it’s next to impossible to get as much performance as the Pulsar 200NS in the sub-200cc segment. 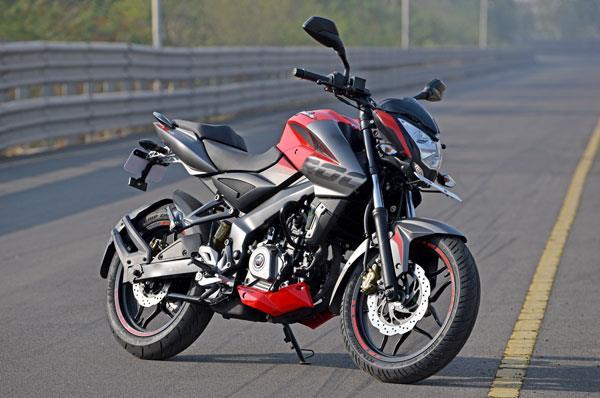 Power: 23.5hp at 9,500rpm
Torque: 18.3Nm at 8,000rpm
Price: Rs 96,749 (ex-showroom Delhi)
Also read: 2017 Bajaj Pulsar 200NS review
Suzuki Gixxer/SF
Ask most of us here at Autocar India what our favourite sub-Rs 1 lakh bike is and more likely than not, the answer you’ll hear is the Suzuki Gixxer, or its faired sibling, the Gixxer SF. When the original Gixxer was launched back in 2014, most of us dismissed it as a Yamaha FZ16 clone, until we rode it for the first time that is. What this bike delivers is hard to quantify on paper. It’s not the most powerful bike in its segment, nor is the epitome of frugality. But if there’s a bike that makes its case purely on its ‘X factor’, it has to be the Gixxer. One aspect that makes it so easily lovable is just how much fun it is to ride, a lot of which can be attributed to its fantastic handling package. It’s a bike that scores high on practicality as well, with a comfortable saddle and seating position, and a light kerb weight of just 135kg. With recent updates, the bike now features an optional rear disc brake, while the faired SF is now additionally equipped with electronic fuel injection. And the Gixxer looks great in both its faired and non-faired guises, especially when you take into consideration their racing-inspired blue livery.
[Source”timesofindia”]
Tweet Pin It